Tonight
Mostly clear, with a low around 1. Wind chill values as low as -12. Calm wind becoming south 5 to 7 mph after midnight.
Wednesday
Sunny, with a high near 32. Wind chill values as low as -12. Breezy, with a south southwest wind 7 to 12 mph increasing to 13 to 18 mph in the afternoon. Winds could gust as high as 28 mph.
Wednesday Night
Mostly cloudy, with a low around 20. South southwest wind 9 to 14 mph, with gusts as high as 21 mph.
Weather forecast provided by weather.gov.
Search

More Information About the Facility Plan

The Board has had a number of discussions over the last several months related to the district's facility plan and the financing necessary to support the plan. I have been asked several times what will be included, how much will it cost, and how it will impact the levy.

There are three main components of the work that are color-coded on the image provided.

The grey areas on the image are areas of the building where the majority of the anticipated work will be related to the HVAC system, ADA compliance, energy efficiency, safety and esthetics, parking lot improvements and other infrastructure needs.  This work is estimated to be 6.3 million dollars. It will be funded using SAVE funds and will not impact the levy. We are able to borrow against the SAVE fund for 11 years to generate enough revenue to complete the designated projects.  While it will not increase the tax levy it will commit the use of our SAVE funds until they are paid back in full.

The lighter pink areas on the image are areas of the building that would be repurposed to expand STEM education and maximize the space to be as efficient as possible.  It would also address some ADA issues in an office area and adult restroom areas. The darker red areas are new additions. These new additions include a career technical education wing to support instruction in the areas of agriculture, auto technology, construction, woods, and welding and also a new gym that will include a standard size court and fitness area.  The total cost of the repurposed space and additions is 14.7 million dollars and will require a bond issue to complete.

Currently, the total levy is $14.60 so it would require adding approximately $2.70 to the levy if the bond issue passes.  There has been a discussion about how we could lessen the impact of the levy by reducing other operations funds, specifically the management fund by $0.95. There are many factors that go into setting a budget and determining the levy including some things such as state aid, enrollment, and valuations.  However, reducing the management levy would make the estimated impact of the levy $1.75 setting the levy at approximately $16.35.

Most people want to know how the increased levy would impact them on a personal level if the bond issue would pass.  The following financial fact sheet helps to explain the impact of the levy based on the valuation of personal, commercial, and agricultural property. 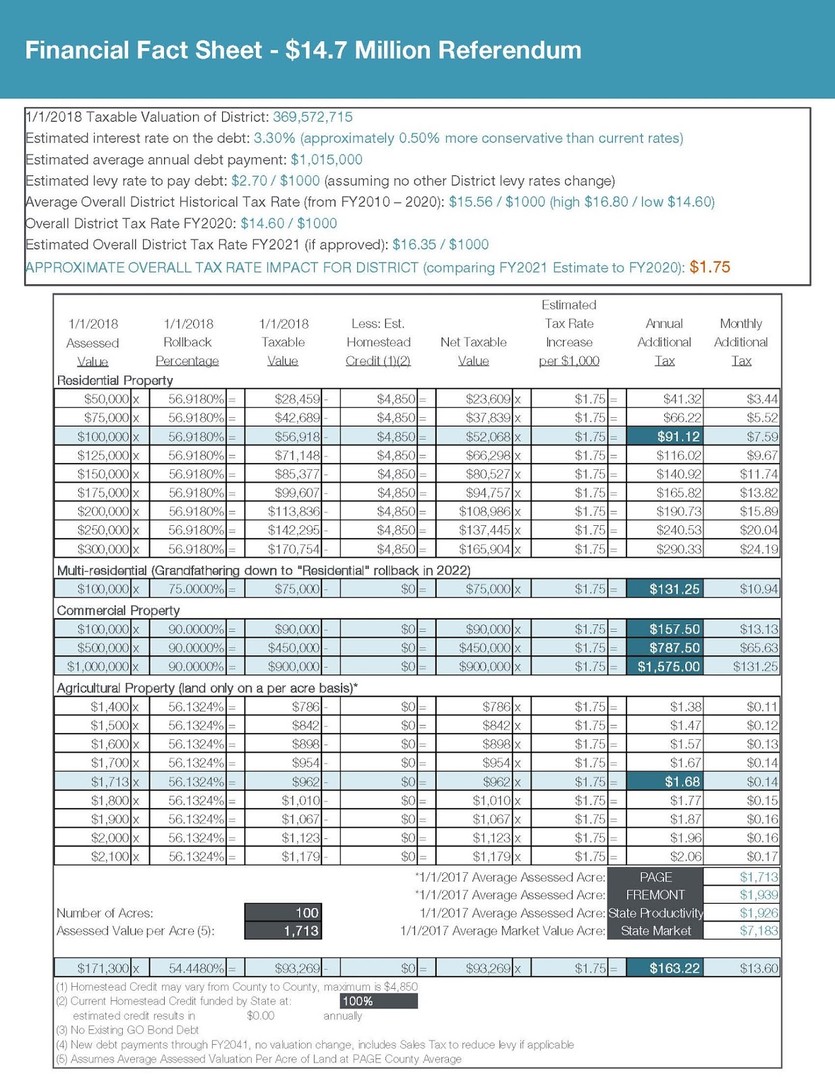 Hopefully, this information provides you with a better understanding of the facility plan and finances necessary to support the completion of the project.